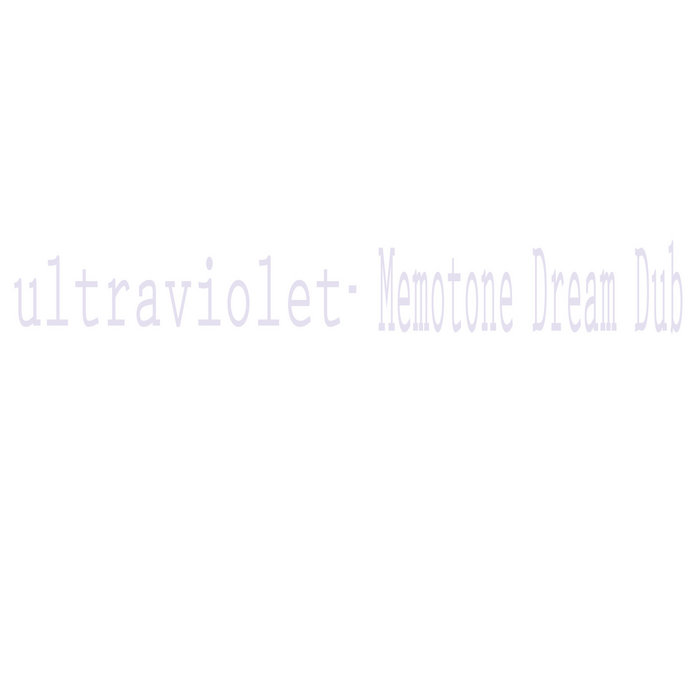 Ahead of two special live events we are very excited to announce the first release of two remixes, the fiirst ‘Ultraviolet Memotone Dream Dub' is by Memotone, an artist also hailing from Bristol, the two have formed a strong mutual respect for each other.

Memotone AKA multi-instrumentalist William Yates says “the original track instantly gleamed at me. I could hear it for what it was, but I could also hear the potential to stretch and pull it in certain directions. I don't think I've taken it too far from the original, I've just pushed it further into the world I could hear was inside it. - Process and procedure aside I feel like I just teased out a thread that was shining in the original track but that hadn't been explored. With the use of a tape machine with adjustable speed control and an analogue delay box I brought the dream dub to life.”

Memotone is a composer and producer working in the space between traditional instrumental music (jazz, classical, folk) and contemporary experimental electronics. Using an all hardware set up with instrumentation as a key focus of his music.

A pivotal point in Bristol’s dub-informed lineage, Pitchfork compared Maximum Joys sound to "one of the Slits backed by the Gang of Four”, while PopMatters said, "Musically, the group’s use of complex percussion, horns, danceable bass lines, and overtly English female vocals built a bridge between the worlds of Afrobeat, reggae, avant-garde jazz, funk and pop".

Returning with a new line-up and all new material, MXMJoY have crafted an album that remains faithful to their roots but showcases an expanded experimental direction into dark electronics and expertly used samples and effects. An immediately enchanting album, ‘P.E.A.C.E’ also explores lush synthscapes, deep house hooks and a pop sensibility partnered with that unmistakable and bewitching vocal.

The reformation was spearheaded by Rainforth with a show at Simple Things in 2015. Her work on solo projects has meant she was able to bring new experience to an old collaboration and she and Llewellin were in the studio immediately after. The album was then written and recorded between Rainforth’s Hackney Studio and Llewellin in the US. Joining them on the tracks are prolific bassist Marek Bero, guitarists James Byron and Jono Trott who contributed their own unique sounds, and drummer Miroslav Haldina who brings analogue tones and depth to the records machine beat backing. They also enlisted David McEwen, who’s worked with Janine on her solo project and is long time sound engineer for On-U Sound and Adrian Sherwood’s recordings and Asian Dub Foundation, to work with them on the overall sound.

MXMJoY are Janine Rainforth, along with Charlie Llewellin and others..
`'The '80s Bristol cult punk band Maximum Joy have reformed and ..we are extremely happy they did. Now going by the name of MXMJOY, the dance band have stayed true to their disco pulse, brass-blasting, vocal ways but built on evolved on their influences .... to remain one of the most intoxicating pop groups around today."
Bozo ... more

Bandcamp Daily  your guide to the world of Bandcamp